Jones offers a detailed and comprehensive overview of the development and decline of the German Democratic party and the German People's party from 1918 to 1933. In tracing the impact of World War I, the runaway inflation to the 1920s, and the Great Depression of the 1930s upon Germany's middle-class electorate, the study demonstrates why the forces of liberalism were ineffective in preventing the rise of nazism and the establishment of the Third Reich. 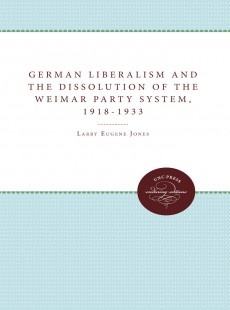 German Liberalism and the Dissolution of the Weimar Party System, 1918-1933