Robert Moeller investigates the German peasantry's rejection of the Weimar Republic in the 1920s and provides a new interpretation of Catholic peasant conservatism in western Germany. According to Moeller, rural support for conservative political solutions to the troubled Weimar Republic was the result of a series of severe economic jolts that began in 1914 and continued unabated until 1933.

During the late nineteenth century, peasant farmers in the Rhineland and Wesphalia adjusted their production to a capitalist market and enjoyed an unprecedented period of prosperity that lasted until the outbreak of World War I. After August 1914 peasant producers confronted state intervention in the agricultural sector, regulation of prices and markets, and the subordination of agrarian interests to the demands of urban consumers. A controlled economy for many agricultural products continued into the postwar period.

Focusing on the Catholic peasantry, Moeller shows that peasant rejection of the Weimar Republic was firmly grounded in the immediate circumstances of the war economy and the uneven process of postwar recovery. He challenges the dominant view that rural support for conservative political solutions was primarily the product of the peasantry's hostility toward industrial capitalism and of long-term social and political affinities dating from the nineteenth century. Moeller's findings show that conservative agrarian ideology was carefully formulated in response to the specific peasant grievances that originated in this period of continuing economic and political crisis. 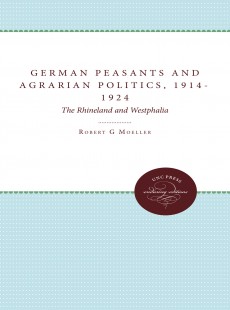 The Rhineland and Westphalia