German Social Democracy and the Rise of Nazism explores the failure of Germany's largest political party to stave off the Nazi threat to the Weimar republic. In 1928 members of the Social Democratic Party (SPD) were elected to the chancellorship and thousands of state and municipal offices. But despite the party's apparent strengths, in 1933 Social Democracy succumbed to Nazi power without a fight. Previous scholarship has blamed this reversal of fortune on bureaucratic paralysis, but in this revisionist evaluation, Donna Harsch argues that the party's internal dynamics immobilized the SPD. Harsch looks closely at Social Democratic ideology, structure, and political culture, examining how each impinged upon the party's response to economic disaster, parliamentary crisis, and the Nazis. She considers political and organizational interplay within the SPD as well as interaction between the party, the Socialist trade unions, and the republican defense league. Conceding that lethargy and conservatism hampered the SPD, Harsch focuses on strikingly inventive ideas put forward by various Social Democrats to address the republic's crisis. She shows how the unresolved competition among these proposals blocked innovations that might have thwarted Nazism. 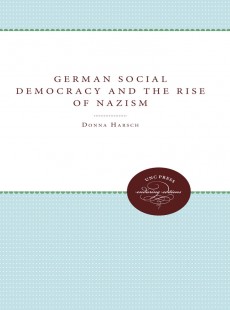 German Social Democracy and the Rise of Nazism