German Americans were one of the largest immigrant groups in the Civil War era, and they comprised nearly 10 percent of all Union troops. Yet little attention has been paid to their daily lives--both on the battlefield and on the home front--during the war. This collection of letters, written by German immigrants to friends and family back home, provides a new angle to our understanding of the Civil War experience and challenges some long-held assumptions about the immigrant experience at this time.

Originally published in Germany in 2002, this collection contains more than three hundred letters written by seventy-eight German immigrants--men and women, soldiers and civilians, from the North and South. Their missives tell of battles and boredom, privation and profiteering, motives for enlistment and desertion and for avoiding involvement altogether. Although written by people with a variety of backgrounds, these letters describe the conflict from a distinctly German standpoint, the editors argue, casting doubt on the claim that the Civil War was the great melting pot that eradicated ethnic antagonisms. 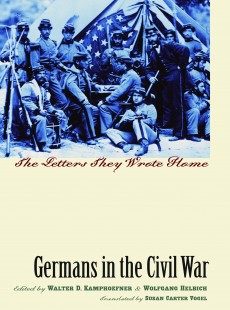 Germans in the Civil War

The Letters They Wrote Home