In Germans to the Front, David Large charts the path from Germany's total demilitarization immediately after World War II to the appearance of the Bundeswehr, the West German army, in 1956. The book is the first comprehensive study in English of West German rearmament during this critical period. Large's analysis of the complex interplay between the diplomatic and domestic facets of the rearmament debate illuminates key elements in the development of the Cold War and in Germany's ongoing difficulty in formulating a role for itself on the international scene.

Rearmament severely tested West Germany's new parliamentary institutions, dramatically defined emerging power relationships in German politics, and posed a crucial challenge for the NATO alliance. Although the establishment of the Bundeswehr ultimately helped stabilize the nation, the acrimony surrounding its formation generated deep divisions in German society that persisted long after the army took the field. According to Large, the conflict was so bitter because rearmament forced a confrontation with fundamental questions of national identity and demanded a painful reckoning with the past. 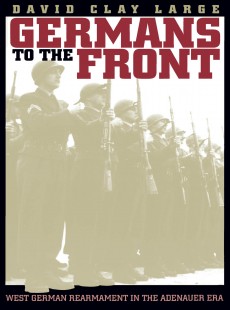 Germans to the Front