Unwilling to accept the division of their country, West German leaders regarded the German Democratic Republic (GDR) as an illegitimate upstart--a puppet of the occupying Soviet forces. Together with France, Britain, and the United States, West Germany applied political and financial pressure around the globe to ensure that the GDR remain unrecognized by all countries outside the communist camp. Proclamations of ideological solidarity and narrowly targeted bursts of aid gave the GDR momentary leverage in such diverse countries as Egypt, Iraq, Ghana, and Indonesia; yet West Germany's intimidation tactics, coupled with its vastly superior economic resources, blocked any decisive East German breakthrough.

Gray argues that Bonn's isolation campaign was dropped not for want of success, but as a result of changes in West German priorities as the struggle against East Germany came to hamper efforts at reconciliation with Israel, Poland, and Yugoslavia--all countries of special relevance to Germany's recent past. Interest in a morally grounded diplomacy, together with the growing conviction that the GDR could no longer be ignored, led to the abandonment of Bonn's effective but outdated efforts to hinder worldwide recognition of the East German regime. 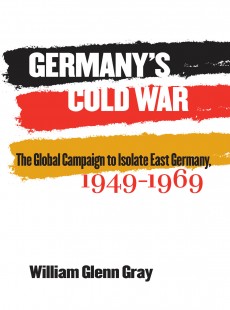