On August 4, 2004, Jason Crigler was onstage in a New York City nightclub when a blood vessel burst in his brain. The thirty-four-year-old guitarist, a fixture in the downtown music scene who had played with Marshall Crenshaw, Linda Thompson, and John Cale, narrowly survived the bleed. A string of complications that followed—meningitis, seizures, coma—left him immobile and unresponsive, with his doctors saying nothing more could be done. Meanwhile, Jason's medical insurance quickly hit its lifetime cap, meaning that his policy would no longer pay for his care. Despite such overwhelming circumstances, Jason's parents, sister, and pregnant wife were sure that he was still there, trapped inside his incapacitated body but able to fight his way back. They mounted an intense course of rehabilitation for him even as they fought a healthcare system that was geared toward defeat. In intimate and unflinching prose, Mojie Crigler chronicles her brother's harrowing decline and miraculous recovery. Get Me Through Tomorrow is much more than the story of a medical victory amid a broken healthcare system, however. It is about a sister's metamorphosis from fearful naïf to assertive caregiver. It is about families bridging heartache and divorce to find hope. It is about the deep and enduring relationship between siblings—and the love that transforms them. 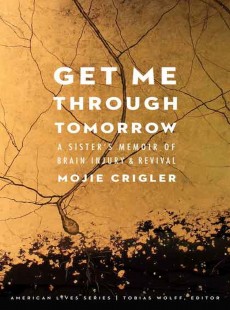 Get Me Through Tomorrow

A Sister's Memoir of Brain Injury and Revival