In this companion to his celebrated earlier book, Gettysburg--The Second Day, Harry Pfanz provides the first definitive account of the fighting between the Army of the Potomac and Robert E. Lee's Army of Northern Virginia at Cemetery Hill and Culp's Hill--two of the most critical engagements fought at Gettysburg on 2 and 3 July 1863. Pfanz provides detailed tactical accounts of each stage of the contest and explores the interactions between--and decisions made by--generals on both sides. In particular, he illuminates Confederate lieutenant general Richard S. Ewell's controversial decision not to attack Cemetery Hill after the initial southern victory on 1 July. Pfanz also explores other salient features of the fighting, including the Confederate occupation of the town of Gettysburg, the skirmishing in the south end of town and in front of the hills, the use of breastworks on Culp's Hill, and the small but decisive fight between Union cavalry and the Stonewall Brigade. 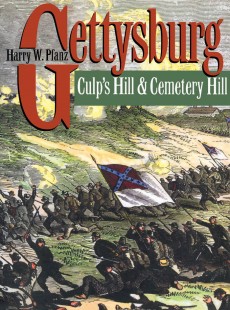