Girl Archaeologist recounts Alice Kehoe's life, begun in an era very different from the twenty-first century in which she retired as an honored elder archaeologist. She persisted against entrenched patriarchy in her childhood, at Harvard University, and as she did fieldwork with her husband in the northern plains. A senior male professor attempted to quash Kehoe's career by raping her. Her Harvard professors refused to allow her to write a dissertation in archaeology. Universities paid her less than her male counterparts. Her husband refused to participate in housework or childcare. Working in archaeology and in the histories of American First Nations, Kehoe published a series of groundbreaking books and articles. Although she was denied a conventional career, through her unconventional breadth of research and her empathy with First Nations people she gained a wide circle of collaborators and colleagues. Throughout her career Kehoe found and fostered a sisterhood of feminists strong, bright women archaeologists, anthropologists, and ethnohistorians who have been essential to the field.Girl Archaeologist is the story of how one woman pursued a professional career in a male-dominated field during a time of great change in American middle-class expectations for women. 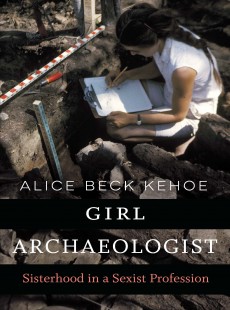 Sisterhood in a Sexist Profession