At the sound of the bell on the last day of kindergarten, B.J. Hollars and his six-year-old son, Henry, hop in the car to strike out on a 2,500-mile road trip retracing the Oregon Trail. Their mission: to rediscover America, and Americans, along the way. Throughout their two-week adventure, they endure the usual setbacks (car trouble, inclement weather, and father-son fatigue), but their most compelling drama involves people, privilege, and their attempt to find common ground in an all-too-fractured country. Writing in the footsteps of John Steinbeck's Travels with Charley, Hollars picks up the trail with his son more than half a century later. Together they sidle up to a stool at every truck stop, camp by every creek, and roam the West. They encounter not only the beauty and heartbreak of America, but also the beauty and heartbreak of a father and son eager to make the most of their time together. From Chimney Rock to Independence Rock to the rocky coast of Oregon, they learn and relearn the devastating truth of America's exploitative past, as well as their role within it.Go West, Young Man recounts the author's effort to teach his son the difficult realities of our nation's founding while also reaffirming his faith in America today. 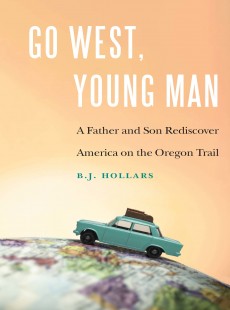 A Father and Son Rediscover America on the Oregon Trail