The centrality of religion in the life of the Old South, the strongly religious nature of the sectional controversy over slavery, and the close affinity between religion and antebellum American nationalism all point toward the need to explore the role of religion in the development of southern sectionalism. In Gospel of Disunion Mitchell Snay examines the various ways in which religion adapted to and influenced the development of a distinctive southern culture and politics before the Civil War, adding depth and form to the movement that culminated in secession. From the abolitionist crisis of 1835 through the formation of the Confederacy in 1861, Snay shows how religion worked as an active agent in translating the sectional conflict into a struggle of the highest moral significance. At the same time, the slavery controversy sectionalized southern religion, creating separate institutions and driving theology further toward orthodoxy. By establishing a biblical sanction for slavery, developing a slaveholding ethic for Christian masters, and demonstrating the viability of separation from the North through the denominational schisms of the 1830s and 1840s, religion reinforced central elements in southern political culture and contributed to a moral consensus that made secession possible. 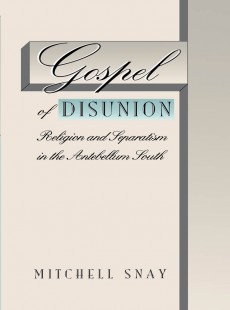 Religion and Separatism in the Antebellum South