Just weeks after Jackie Robinson joined the Brooklyn Dodgers, Larry Doby joined Robinson in breaking the color barrier in the major leagues when he became the first black player to integrate the American League, signing with the Cleveland Indians in July 1947. Doby went on to be a seven-time All-Star center fielder who led the Indians to two pennants. In many respects Robinson and Doby were equals in their baseball talent and experiences and had remarkably similar playing careers: both were well-educated, well-spoken World War II veterans and both had played spectacularly, albeit briefly, in the Negro Leagues. Like Robinson, Doby suffered brickbats, knock-down pitches, spit in his face, and other forms of abuse and discrimination. Doby was also a pioneering manager, becoming the second black manager after Frank Robinson. Well into the 1950s Doby was the only African American All-Star in the American League during a period in which fifteen black players became National League All-Stars. Why is Doby largely forgotten as a central figure in baseball's integration? Why has he not been accorded his rightful place in baseball history? Greatness in the Shadows attempts to answer these questions, bringing Doby's story to life and sharing his achievements and firsts with a new generation. 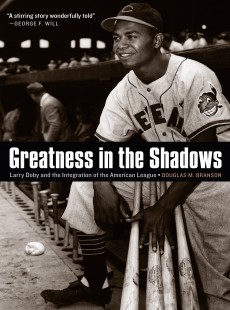 Greatness in the Shadows

Larry Doby and the Integration of the American League