Hairs vs. Squares is an ode to an unforgettable season that began with the first major players' strike in the history of North American sports and ended with a record-setting World Series played by two of the game's greatest and most colorful dynasties. In a sign of the times it was Hippies vs. Hardhats, a clash of cultures with the hirsute, mod Mustache Gang colliding with the clean-cut, conservative Big Red Machine on the game's grandest stage. When the Oakland A's met the Cincinnati Reds in the 1972 Fall Classic, more than a championship was at stake. The more than two dozen interviews bring to life a time when controversy was commonplace, both inside and outside the national pastime. In baseball, Willie Mays was traded, Hank Aaron was chasing down Babe Ruth's home run record, and Dick Allen was helping to save the Chicago White Sox franchise while winning the American League's Most Valuable Player award. Outside the American pastime the war in Vietnam was raging, campus protests spread throughout the country, and Watergate and the Munich Olympics headlined the tumultuous year. The 1972 Major League Baseball season was marked by the rapid rise of rookies and young stars, the fall of established teams and veterans, courageous comebacks, and personal redemptions. Along with the many unforgettable and outrageous characters inside baseball, Hairs vs. Squares emphasizes the dramatic changes that took place on and off the field in the 1970s. Owners' lockouts, on-field fights, maverick managers, controversial trades, artificial fields, the first full five-game League Championship Series, and the closest, most competitive World Series ever, combined to make the 1972 season as complex as the social and political unrest that marked the era. 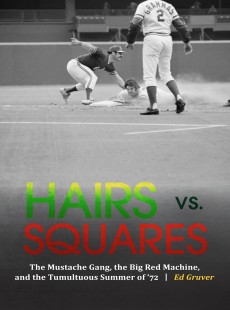 The Mustache Gang, the Big Red Machine, and the Tumultuous Summer of '72