With Franklin Roosevelt's death in April of 1945, Vice President Harry Truman and Sen. Arthur Vandenberg, the Republican leader on foreign policy, inherited a world in turmoil. With Europe flattened and the Soviets emerging as America's new adversary, Truman and Vandenberg built a tight partnership with one another to address the challenges at hand. Working in strong bipartisan fashion at a bitterly partisan time, they crafted a dramatic new foreign policy through which the United States stepped boldly onto the world stage for the first time to protect its friends, confront its enemies, and promote freedom. These two men—unlikely partners by way of personality and style—transformed the United States from a reluctant global giant to a self-confident leader; from a nation that traditionally turned inward after war to one that remained engaged to shape the postwar landscape; and from a nation with no real military establishment to one that now spends more on defense than the next dozen nations combined. Lawrence J. Haas, an award-winning journalist, reveals how, through the close collaboration of Truman and Vandenberg, the United States created the United Nations to replace the League of Nations, pursued the Truman Doctrine to defend freedom from Communist threat, launched the Marshall Plan to rescue Western Europe's economy from the devastation of war, and established NATO to defend Western Europe. 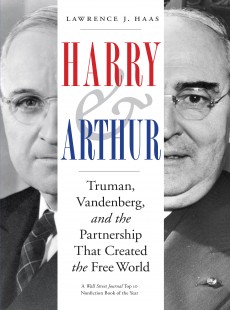 Truman, Vandenberg, and the Partnership That Created the Free World