Hear Me with Your Eyes examines the intrusion of the voice into the cinematographic gaze and the intersections (and ruptures) of the sound-image in Argentine women filmmakers from a feminist perspective. In different ways, Maria Luisa Bemberg, Lita Stantic, Lucrecia Martel, Albertina Carri, Maria Victoria Menis, Lucia Puenzo, Sabrina Farji, Paula de Luque, Anahi Berneri, Sandra Gugliotta, and Gabriela David explore the visual realm through the continuities, intrusions, irrelevancies, harmonies, and desynchronizations of the voice. Or, instead, they explore different voices and their modulations, including whispers, screams, singing, echoes, breathing, resonance, sighs, and the transcendent voice, the narrative voice, the silenced voice, the articulated and unarticulated voice, and that which is none of the above. These voices suggest another relationship with the audiovisual realm, one that seems to include a closeness that erases, if only intermittently, the unalterable relationship between subject and object that characterizes the patriarchal visual regime. 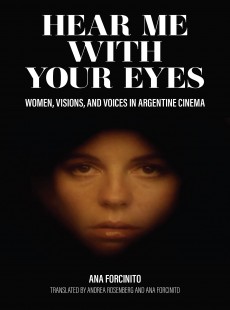 Hear Me with Your Eyes