Challenging traditional accounts of the development of American private law, Peter Karsten offers an important new perspective on the making of the rules of common law and equity in nineteenth-century courts. The central story of that era, he finds, was a struggle between a jurisprudence of the head, which adhered strongly to English precedent, and a jurisprudence of the heart, a humane concern for the rights of parties rendered weak by inequitable rules and a willingness to create exceptions or altogether new rules on their behalf. Karsten first documents the tendency of jurists, particularly those in the Northeast, to resist arguments to alter rules of property, contract, and tort law. He then contrasts this tendency with a number of judicial innovations--among them the sanctioning of 'deep pocket' jury awards and the creation of the attractive-nuisance rule--designed to protect society's weaker members. In tracing the emergence of a pro-plaintiff, humanitarian jurisprudence of the heart, Karsten necessarily addresses the shortcomings of the reigning, economic-oriented paradigm regarding judicial rulemaking in nineteenth-century America. 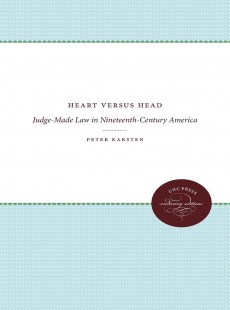