In the presidential campaign of 1948, Henry Wallace set out to challenge the conventional wisdom of his time, blaming the United States, instead of the Soviet Union, for the Cold War, denouncing the popular Marshall Plan, and calling for an end to segregation. In addition, he argued that domestic fascism--rather than international communism--posed the primary threat to the nation. He even welcomed Communists into his campaign, admiring their commitment to peace. Focusing on what Wallace himself later considered his campaign's most important aspect, the troubled relationship between non-Communist progressives like himself and members of the American Communist Party, Thomas W. Devine demonstrates that such an alliance was not only untenable but, from the perspective of the American Communists, undesirable.
Rather than romanticizing the political culture of the Popular Front, Devine provides a detailed account of the Communists' self-destructive behavior throughout the campaign and chronicles the frustrating challenges that non-Communist progressives faced in trying to sustain a movement that critiqued American Cold War policies and championed civil rights for African Americans without becoming a sounding board for pro-Soviet propaganda. 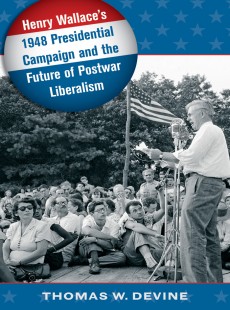 Henry Wallace's 1948 Presidential Campaign and the Future of Postwar Liberalism