While Rosie the Riveter had fewer paid employment options after being told to cede her job to returning World War II veterans, her sisters and daughters found new work opportunities in national defense. The 1948 Women's Armed Services Integration Act created permanent military positions for women with the promise of equal pay. Her Cold War follows the experiences of women in the military from the passage of the Act to the early 1980s.

In the late 1940s, defense officials structured women's military roles on the basis of perceived gender differences. Classified as noncombatants, servicewomen filled roles that they might hold in civilian life, such as secretarial or medical support positions. Defense officials also prohibited pregnant women and mothers from remaining in the military and encouraged many women to leave upon marriage. Before civilian feminists took up similar issues in the 1970s, many servicewomen called for a broader definition of equality free of gender-based service restrictions. Tanya L. Roth shows us that the battles these servicewomen fought for equality paved the way for women in combat, a prerequisite for promotion to many leadership positions, and opened opportunities for other servicepeople, including those with disabilities, LGBT and gender nonconforming people, noncitizens, and more. 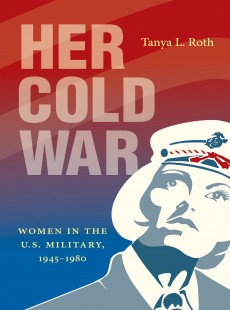