2020 SABR Baseball Research Award In the mid-nineteenth century, two industries arrived on the American scene. One was strictly a business, yet it helped create, define, and disseminate American culture. The other was ostensibly just a game, yet it soon became emblematic of what it meant to be American, aiding in the creation of a national identity. Today, whenever the AT&T call to the bullpen is heard, fans enter Minute Maid Park, or vote for favorite All-Stars (brought to us by MasterCard), we are reminded that advertising has become inseparable from the MLB experience.Here's the Pitch examines this connection between baseball and advertising, as both constructors and reflectors of culture. Roberta J. Newman considers the simultaneous development of both industries from the birth of the partnership, paying particular attention to the ways in which advertising spread the gospel of baseball at the same time professional baseball helped develop a body of consumers ready for the messages of advertising. Newman considers the role of product endorsements in the creation of the culture of celebrity, and of celebrity baseball players in particular, as well as the ways in which new technologies have impacted the intersection of the two industries. From Ty Cobb to Babe Ruth in the 1920s and 1930s to Mickey Mantle, Yogi Berra, and Willie Mays in the postwar years, to Derek Jeter, Rafael Palmeiro, and David Ortiz in the twenty-first century, Newman looks at many of baseball's celebrated players and shows what qualities made them the perfect pitchmen for new products at key moments.Here's the Pitch tells the story of the development of American and an increasingly international culture through the marriage between Mad Men and The Boys of Summer that made for great copy, notable TV advertisements, and lively social media, and shows how baseball's relationship with advertising is stronger than ever. 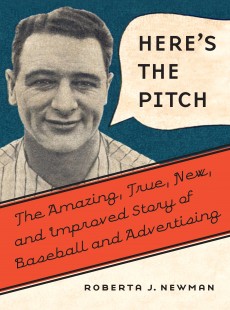 The Amazing, True, New, and Improved Story of Baseball and Advertising