In the 1960s and 1970s, the textile industry's workforce underwent a dramatic transformation, as African Americans entered the South's largest industry in growing numbers. Only 3.3 percent of textile workers were black in 1960; by 1978, this number had risen to 25 percent. Using previously untapped legal records and oral history interviews, Timothy Minchin crafts a compelling account of the integration of the mills.
Minchin argues that the role of a labor shortage in spurring black hiring has been overemphasized, pointing instead to the federal government's influence in pressing the textile industry to integrate. He also highlights the critical part played by African American activists. Encouraged by passage of the 1964 Civil Rights Act, black workers filed antidiscrimination lawsuits against nearly all of the major textile companies. Still, Minchin notes, even after the integration of the mills, African American workers encountered considerable resistance: black women faced continued hiring discrimination, while black men found themselves shunted into low-paying jobs with little hope of promotion. 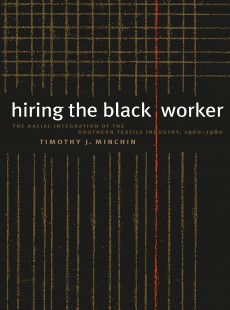 The Racial Integration of the Southern Textile Industry, 1960-1980