Eighty-two percent of German boys and girls between the ages of ten and eighteen belonged to Hitlerjugend--Hitler Youth--or one of its affiliates by the time membership became fully compulsory in 1939. These adolescents were recognized by the SS, an exclusive cadre of Nazi zealots, as a source of future recruits to its own elite ranks, which were made up largely of men under the age of thirty. In this book, Gerhard Rempel examines the special relationship that developed between these two most youthful and dynamic branches of the National Socialist movement and concludes that the coalition gave nazism much of its passionate energy and contributed greatly to its initial political and military success.

Rempel center his analysis of the HJ-SS relationship on two branches of the Hitler Youth. The first of these, the Patrol Service, was established as a juvenile police force to pursue ideological and social deviants, political opponents, and non-conformists within the HJ and among German youth at large. Under SS influence, however, membership in the organization became a preliminary apprenticeship for boys who would go on to be agents and soldiers in such SS-controlled units as the Gestapo and Death's Head Formations. The second, the Land Service, was created by HJ to encourage a return to farm living. But this battle to reverse "the flight from the land" took on military significance as the SS sought to use the Land Service to create "defense-peasants" who would provide a reliable food supply while defending the Fatherland.

The transformation of the Patrol and Land services, like that of the HJ generally, served SS ends at the same time that it secured for the Nazi regime the practical and ideological support of Germany's youth. By fostering in the Hitler Youth as "national community" of the young, the SS believed it could convert the popular movement of nazism into a protomilitary program to produce ideologically pure and committed soldiers and leaders who would keep the movement young and vital. 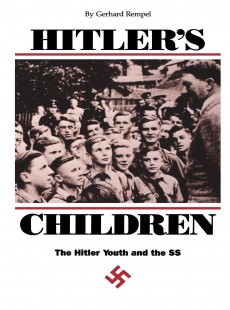 The Hitler Youth and the SS