The story of the Civil War and Reconstruction in Greene County, Georgia, is a remarkable tale of both fundamental change and essential continuity. In How Curious a Land, Jonathan Bryant follows the county's social, economic, and legal transformation from a wealthy, self-sufficient plantation economy based on slavery to a largely impoverished, economically dependent community dominated by a new commercial class of merchants and lawyers.

Emancipated slaves made up two-thirds of the county's population at the end of the Civil War, and thanks to an able, charismatic, and politically active leadership, they enjoyed early success in pressing for their rights. But their gains, says Bryant, were only temporary, because the white elite retained control of the legal system and used it effectively against blacks. Law also helped shape the course of economic change as, for example, postbellum laws designed to benefit the new commercial elite ensured poverty for most of the county's small farmers, both black and white, by relegating them to the status of sharecroppers and tenants. As a result, the county's wealth, though greatly diminished in the postbellum years, remained concentrated in the hands of a small elite. 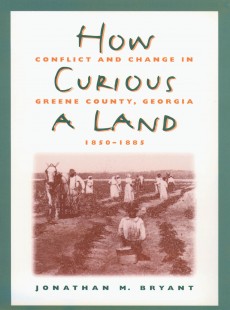 How Curious a Land