In the Best Interests of Baseball? is a thoughtful, balanced look at the impact of the ninth commissioner of baseball, Bud Selig, on the sport as well as an examination of the commissioner’s position in a historical context. The more controversial topics Andrew Zimbalist probes include the conflicts of interest arising from Selig’s original role as owner/commissioner; Selig’s response to the persistent steroids scandal; the commissioner’s role in promoting and marketing the sport; player relations and the collective-bargaining agreement; managing explosive conflicts among the owners; the game’s economic challenges; major changes made on Selig’s watch; and Selig’s growing compensation. Underlying this very public evaluation is a far more challenging question: given the legal, economic, and political architecture of Major League Baseball, can any commissioner act in the best interest of the game? Based on dozens of interviews with Selig, former president and chief operating officer of Major League Baseball Bob DuPuy, and scores of baseball insiders and interested outsiders, as well as on mountains of historic baseball documents, In the Best Interests of Baseball? challenges everything you thought you knew about the game, the Major Leagues, the players, the owners, and, most of all, the man at the helm. This edition includes a new preface and epilogue by the author discussing the developments in the baseball industry since 2005 and anticipating what lies ahead for the national pastime. 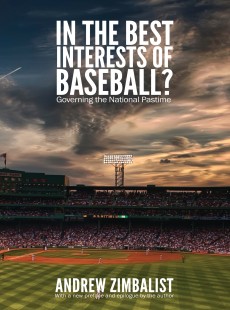 In the Best Interests of Baseball?