"[Trulock] brings her subject alive and escorts him through a brilliant career. One can easily say that the definitive work on Joshua Chamberlain has now been done.--James Robertson, Richmond Times-Dispatch

"An example of history as it should be written. The author combines exhaustive research with an engaging prose style to produce a compelling narrative which will interest scholars and Civil War buffs alike.--Journal of Military History

"A solid biography. . . . It does full justice to an astonishing life.--Library Journal

This remarkable biography traces the life and times of Joshua L. Chamberlain, the professor-turned-soldier who led the Twentieth Maine Regiment to glory at Gettysburg, earned a battlefield promotion to brigadier general from Ulysses S. Grant at Petersburg, and was wounded six times during the course of the Civil War. Chosen to accept the formal Confederate surrender at Appomattox, Chamberlain endeared himself to succeeding generations with his unforgettable salutation of Robert E. Lee's vanquished army. After the war, he went on to serve four terms as governor of his home state of Maine and later became president of Bowdoin College. He wrote prolifically about the war, including The Passing of the Armies, a classic account of the final campaign of the Army of the Potomac. 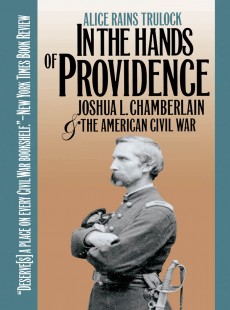 In the Hands of Providence