The Huichols (or Wixárika) of western Mexico are among the most resilient and iconic indigenous groups in Mexico today. In the Lands of Fire and Sun examines the Huichol Indians as they have struggled to maintain their independence over two centuries. From the days of the Aztec Empire, the history of west-central Mesoamerica has been one of isolation and a fiercely independent spirit, and one group that maintained its autonomy into the days of Spanish colonization was the Huichol tribe. Rather than assimilating into the Hispanic fold, as did so many other indigenous peoples, the Huichols sustained their distinct identity even as the Spanish Crown sought to integrate them. In confronting first the Spanish colonial government, then the Mexican state, the Huichols displayed resilience and cunning as they selectively adapted their culture, land, and society to the challenges of multiple new eras. By incorporating elements of archaeology, anthropology, cultural geography, and history, Michele McArdle Stephens fills the gaps in the historical documentation, teasing out the indigenous voices from travel accounts, Spanish legal sources, and European ethnographic reports. The result is a thorough examination of one of the most vibrant, visible societies in Latin America. 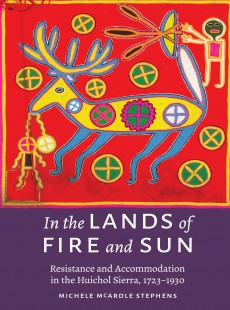 In the Lands of Fire and Sun

Resistance and Accommodation in the Huichol Sierra, 1723–1930