As a student of American history, as a hunter, horseman, and former Marine, and as someone passionate about the West, Dan Aadland had long felt a kinship with Theodore Roosevelt. One day, on a single-footing horse, lever-action rifle under his knee, Aadland set out to become acquainted with TR as only those who shared his experiences could. In Trace of TR documents that quest, inviting readers to ride along and get to know Theodore Roosevelt through the western environment that so profoundly influenced him.   Accompany Aadland as he rides the broad prairies in search of TR’s “prongbuck,” tracks elk through the rugged Big Horn Mountains, and pursues a glimpse of the grizzly in the Absaroka Wilderness. Along the way the author’s campfire musings and reflections on Roosevelt’s writings further deepen and enrich this unique examination of our twenty-sixth president. With the trill of the western meadowlark and the bugle of the elk, the creak of saddle leather and the scent of sage, Aadland’s journey takes readers into TR’s beloved Dakota Territory then and now, offering a kindred spirit’s moving, deftly drawn portrait of both the land and the man across the space of a century. 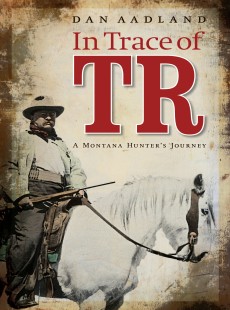 In Trace of TR