In 1913 the State of North Carolina officially recognized Robeson County Indians as "Cherokees," a designation that went largely unnoticed by the Federal Government. When the same Indians petitioned for Federal recognition and assistance in 1915, the Senate tasked the Office of Indian Affairs to report on the "tribal rights and conditions" of those Robeson County Indians. Special Indian Agent Orlando McPherson, a Midwesterner who was in the final stages of a long career as a civil servant, was commissioned to investigate.

The resulting federal report is essentially literature review in the guise of fact-finding. It relies heavily on Robeson county legislator Hamilton McMillan's musings on the relationship between Sir Walter Raleigh's Lost Colony and the Indians around Robeson County. The report reaches many erroneous conclusions, in part because it was based in an anthropological framework of white supremacy, segregation-era politics, and assumptions about racial "purity." In fact, later researchers would establish that the Lumbees, as Malinda Lowery writes, "are survivors from the dozens of tribes in that territory who established homes with the Native people, as well as free European and enslaved African settlers, who lived in what became their core homeland: the low-lying swamplands along the border of North and South Carolina." Excavations would later establish the presence of Native people in that homeland since at least 1000 A.D.

Ironically, McPherson's murky colonial history connecting Lumbees to early colonial settlers was used to legitimize them and to deflect their categorization as African-Americans. The McPherson report documents one important phase of an Indian people's long path to self-determination and political recognition, a path that would designate them variously as Croatan, Cherokee Indians of Robeson County, Siouan Indians of the Lumber River, and finally, Lumbee--the title of their own choosing and the one we use today. 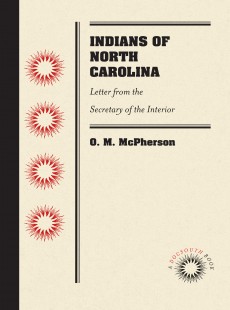 Letter from the Secretary of the Interior