Recent years have witnessed a resurgence of biological research into the causes of crime, but the origins of this kind of research date back to the late nineteenth century. Here, Richard Wetzell presents the first history of German criminology from Imperial Germany through the Weimar Republic to the end of the Third Reich, a period that provided a unique test case for the perils associated with biological explanations of crime.

Drawing on a wealth of primary sources from criminological, legal, and psychiatric literature, Wetzell shows that German biomedical research on crime predominated over sociological research and thus contributed to the rise of the eugenics movement and the eventual targeting of criminals for eugenic measures by the Nazi regime. However, he also demonstrates that the development of German criminology was characterized by a constant tension between the criminologists' hereditarian biases and an increasing methodological sophistication that prevented many of them from endorsing the crude genetic determinism and racism that characterized so much of Hitler's regime. As a result, proposals for the sterilization of criminals remained highly controversial during the Nazi years, suggesting that Nazi biological politics left more room for contention than has often been assumed. 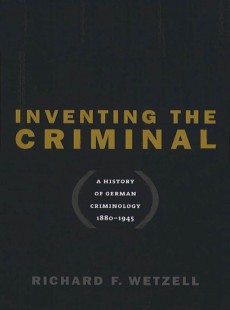