In the late eighteenth century, Hawai'i's ruling elite employed sophisticated methods for resisting foreign intrusion. By the mid-nineteenth century, however, American missionaries had gained a foothold in the islands. Jennifer Thigpen explains this important shift by focusing on two groups of women: missionary wives and high-ranking Hawaiian women. Examining the enduring and personal exchange between these groups, Thigpen argues that women's relationships became vital to building and maintaining the diplomatic and political alliances that ultimately shaped the islands' political future. Male missionaries' early attempts to Christianize the Hawaiian people were based on racial and gender ideologies brought with them from the mainland, and they did not comprehend the authority of Hawaiian chiefly women in social, political, cultural, and religious matters. It was not until missionary wives and powerful Hawaiian women developed relationships shaped by Hawaiian values and traditions--which situated Americans as guests of their beneficent hosts--that missionaries successfully introduced Christian religious and cultural values.

Incisively written and meticulously researched, Thigpen's book sheds new light on American and Hawaiian women's relationships, illustrating how they ultimately provided a foundation for American power in the Pacific and hastened the colonization of the Hawaiian nation. 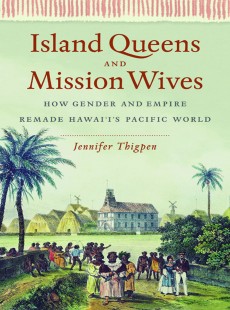 How Gender and Empire Remade Hawai