Jamaica Ladies is the first systematic study of the free and freed women of European, Euro-African, and African descent who perpetuated chattel slavery and reaped its profits in the British Empire. Their actions helped transform Jamaica into the wealthiest slaveholding colony in the Anglo-Atlantic world. Starting in the 1670s, a surprisingly large and diverse group of women helped secure English control of Jamaica and, crucially, aided its developing and expanding slave labor regime by acquiring enslaved men, women, and children to protect their own tenuous claims to status and independence.

Female colonists employed slaveholding as a means of advancing themselves socially and financially on the island. By owning others, they wielded forms of legal, social, economic, and cultural authority not available to them in Britain. In addition, slaveholding allowed free women of African descent, who were not far removed from slavery themselves, to cultivate, perform, and cement their free status. Alongside their male counterparts, women bought, sold, stole, and punished the people they claimed as property and vociferously defended their rights to do so. As slavery's beneficiaries, these women worked to stabilize and propel this brutal labor regime from its inception. 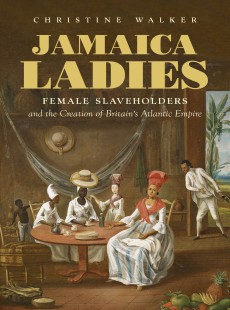 Female Slaveholders and the Creation of Britain's Atlantic Empire