James Longstreet stood with Robert E. Lee and Stonewall Jackson in the great triumvirate of the Army of Northern Virginia. He fought from First Manassas through Appomattox and served as Lee's senior subordinate for most of that time. In this classic work, first published by UNC Press in 1936, H. J. Eckenrode and Bryan Conrad follow Longstreet from his leading role in the military history of the Confederacy through his controversial postwar career and eventual status as an outcast in Southern society. Though they acknowledge his considerable gifts as a corps commander and absolve him of guilt for the Gettysburg debacle, the authors also call attention to the consequences of Longstreet's unbridled ambition, extreme self-confidence, and stubbornness. 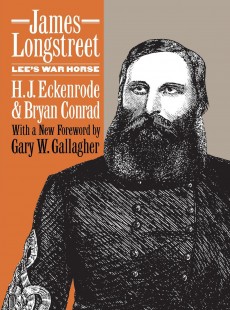