"The Army was much embarrassed by the absence of the cavalry," Robert E. Lee wrote of the Gettysburg campaign, stirring a controversy that continues even today. Lee's statement was an indirect indictment of Gen. James Ewell Brown ("Jeb") Stuart, who was the cavalry. This book reexamines the questions that have shadowed the legendary Confederate hero and offers a fresh, informed interpretation of his role at Gettysburg.Avoiding the partisan pros and cons characterizing previous accounts, Warren C. Robinson reassesses the historical record to come to a clearer view of Stuart's orders for the crucial battle (as well as what was expected of him), of his actual performance, and of the impact his late arrival had on the outcome of the campaign. Though Stuart may not have disobeyed Lee's orders, Robinson argues, he did abuse the general's discretion by raiding Washington rather than scouting for the army at Gettysburg a move that profoundly affected Confederate fortunes and perhaps the war itself. 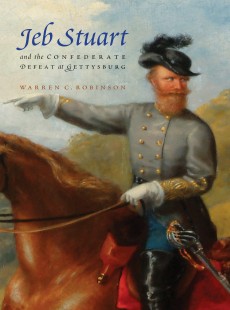 Jeb Stuart and the Confederate Defeat at Gettysburg