Americans wrote fiercely during the Civil War. War surprised, devastated, and opened up imagination, taking hold of Americans' words as well as their homes and families. The personal diary—wildly ragged yet rooted in day following day—was one place Americans wrote their war. Diaries, then, have become one of the best-known, most-used sources for exploring the life of the mind in a war-torn place and time. Delving into several familiar wartime diaries kept by women of the southern slave-owning class, Steven Stowe recaptures their motivations to keep the days close even as war tore apart the brutal system of slavery that had benefited them. Whether the diarists recorded thoughts about themselves, their opinions about men, or their observations about slavery, race, and warfare, Stowe shows how these women, by writing the immediate moment, found meaning in a changing world.

In studying the inner lives of these unsympathetic characters, Stowe also explores the importance—and the limits—of historical empathy as a condition for knowing the past, demonstrating how these plain, first-draft texts can offer new ways to make sense of the world in which these Confederate women lived. 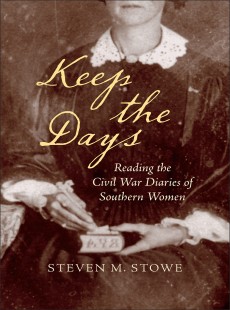