While fighting his way toward Atlanta, William T. Sherman encountered his biggest roadblock at Kennesaw Mountain, where Joseph E. Johnston's Army of Tennessee held a heavily fortified position. The opposing armies confronted each other from June 19 to July 3, 1864, and Sherman initially tried to outflank the Confederates. His men endured heavy rains, artillery duels, sniping, and a fierce battle at Kolb's Farm before Sherman decided to directly attack Johnston's position on June 27. Kennesaw Mountain tells the story of an important phase of the Atlanta campaign. Historian Earl J. Hess explains how this battle, with its combination of maneuver and combat, severely tried the patience and endurance of the common soldier and why Johnston's strategy might have been the Confederates' best chance to halt the Federal drive toward Atlanta. He gives special attention to the engagement at Kolb's Farm on June 22 and Sherman's assault on June 27. A final section explores the Confederate earthworks preserved within the Kennesaw Mountain National Battlefield Park. 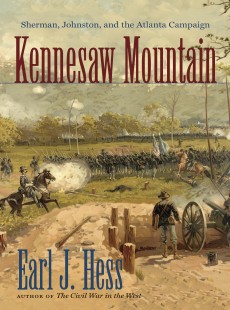 Sherman, Johnston, and the Atlanta Campaign