How do we explain the persistent preoccupation with American Indians in Germany and the staggering numbers of Germans one encounters as visitors to Indian country? As H. Glenn Penny demonstrates, that preoccupation is rooted in an affinity for American Indians that has permeated German cultures for two centuries. This affinity stems directly from German polycentrism, notions of tribalism, a devotion to resistance, a longing for freedom, and a melancholy sense of shared fate.
Locating the origins of the fascination for Indian life in the transatlantic world of German cultures in the nineteenth century, Penny explores German settler colonialism in the American Midwest, the rise and fall of German America, and the transnational worlds of American Indian performers. As he traces this phenomenon through the twentieth century, Penny engages debates about race, masculinity, comparative genocides, and American Indians' reactions to Germans' interests in them. He also assesses what persists of the affinity across the political ruptures of modern German history and challenges readers to rethink how cultural history is made. 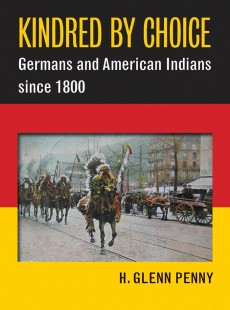 Germans and American Indians since 1800