This landmark work explores the vibrant world of football from the 1920s through the 1950s, a period in which the game became deeply embedded in American life. Though millions experienced the thrills of college and professional football firsthand during these years, many more encountered the game through their daily newspapers or the weekly Saturday Evening Post, on radio broadcasts, and in the newsreels and feature films shown at their local movie theaters. Asking what football meant to these millions who followed it either casually or passionately, Michael Oriard reconstructs a media-created world of football and explores its deep entanglements with a modernizing American society.

Football, claims Oriard, served as an agent of "Americanization" for immigrant groups but resisted attempts at true integration and racial equality, while anxieties over the domestication and affluence of middle-class American life helped pave the way for the sport's rise in popularity during the Cold War. Underlying these threads is the story of how the print and broadcast media, in ways specific to each medium, were powerful forces in constructing the football culture we know today. 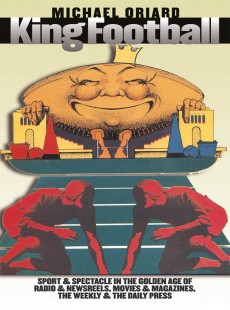 Sport and Spectacle in the Golden Age of Radio and Newsreels, Movies and Magazines, the Weekly and the Daily Press