The power of unions in workers' lives and in the American political system has declined dramatically since the 1970s. In recent years, many have argued that the crisis took root when unions stopped reaching out to workers and workers turned away from unions. But here Lane Windham tells a different story. Highlighting the integral, often-overlooked contributions of women, people of color, young workers, and southerners, Windham reveals how in the 1970s workers combined old working-class tools--like unions and labor law--with legislative gains from the civil and women's rights movements to help shore up their prospects. Through close-up studies of workers' campaigns in shipbuilding, textiles, retail, and service, Windham overturns widely held myths about labor's decline, showing instead how employers united to manipulate weak labor law and quash a new wave of worker organizing.

Recounting how employees attempted to unionize against overwhelming odds, Knocking on Labor's Door dramatically refashions the narrative of working-class struggle during a crucial decade and shakes up current debates about labor's future. Windham's story inspires both hope and indignation, and will become a must-read in labor, civil rights, and women's history. 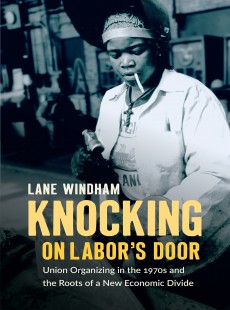