2020 SABR Baseball Research AwardLast Seasons in Havana explores the intersection between Cuba and America's pastime from the late 1950s to the early 1960s, when Fidel Castro overthrew Cuban dictator Fulgencio Batista. César Brioso takes the reader through the triumph of the revolution in 1959 and its impact on professional baseball in the seasons immediately following Castro's rise to power. Baseball in pre‑Castro Cuba was enjoying a golden age. The Cuban League, which had been founded in 1878, just two years after the formation of the National League, was thriving under the auspices of organized baseball. Throughout the first half of the twentieth century, players from the Major Leagues, Minor Leagues, and Negro Leagues had come to Cuba to play in the country's wholly integrated winter baseball league. Cuban teams had come to dominate the annual Caribbean Series tournament, and Havana had joined the highest levels of Minor League Baseball, fielding the Havana Sugar Kings of the Class AAA International League. Confidence was high that Havana might one day have a Major League team of its own. But professional baseball became one of the many victims of Castro's Communist revolution. American players stopped participating in the Cuban League, and Cuban teams moved to an amateur, state‑sponsored model. Focusing on the final three seasons of the Cuban League (1958–61) and the final two seasons of the Havana Sugar Kings (1959–60), Last Seasons in Havana explores how Castro's rise to power forever altered Cuba and the course of a sport that had become ingrained in the island's culture over the course of almost a century. 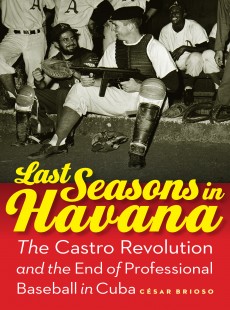 The Castro Revolution and the End of Professional Baseball in Cuba