Focusing primarily on the exclusion of the Chinese, Lucy Salyer analyzes the popular and legal debates surrounding immigration law and its enforcement during the height of nativist sentiment in the early twentieth century. She argues that the struggles between Chinese immigrants, U.S. government officials, and the lower federal courts that took place around the turn of the century established fundamental principles that continue to dominate immigration law today and make it unique among branches of American law. By establishing the centrality of the Chinese to immigration policy, Salyer also integrates the history of Asian immigrants on the West Coast with that of European immigrants in the East.

Salyer demonstrates that Chinese immigrants and Chinese Americans mounted sophisticated and often-successful legal challenges to the enforcement of exclusionary immigration policies. Ironically, their persistent litigation contributed to the development of legal doctrines that gave the Bureau of Immigration increasing power to counteract resistance. Indeed, by 1924, immigration law had begun to diverge from constitutional norms, and the Bureau of Immigration had emerged as an exceptionally powerful organization, free from many of the constraints imposed upon other government agencies. 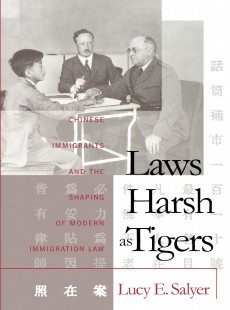 Chinese Immigrants and the Shaping of Modern Immigration Law