Was Robert E. Lee a gifted soldier whose only weaknesses lay in the depth of his loyalty to his troops, affection for his lieutenants, and dedication to the cause of the Confederacy? Or was he an ineffective leader and poor tactician whose reputation was drastically inflated by early biographers and Lost Cause apologists? These divergent characterizations represent the poles between which scholarly and popular opinion on Lee has swung over time. Now, in eight essays, Gary Gallagher offers his own refined thinking on Lee, exploring the relationship between Lee's operations and Confederate morale, the quality of his generalship, and the question of how best to handle his legacy in light of the many distortions that grew out of Lost Cause historiography.

Using a host of contemporary sources, Gallagher demonstrates the remarkable faith that soldiers and citizens maintained in Lee's leadership even after his army's fortunes had begun to erode. Gallagher also engages aspects of the Lee myth with an eye toward how admirers have insisted that their hero's faults as a general represented exaggerations of his personal virtues. Finally, Gallagher considers whether it is useful--or desirable--to separate legitimate Lost Cause arguments from the transparently false ones relating to slavery and secession. 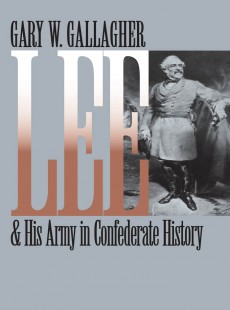 Lee and His Army in Confederate History