In this Civil War Short, Gary W. Gallagher surveys Confederate sentiment in the summer of 1863 and argues that many southerners did not view the battle of Gettysburg as a resounding defeat. Gallagher makes the compelling case that, although southern casualties were tremendous, Confederates across the South, along with the vast majority of Lee's soldiers, persisted in viewing Robert E. Lee as an invincible commander whose army increasingly sustained the hopes of the nation. The work was originally published in The Third Day at Gettysburg and Beyond, edited by Gary W. Gallagher, which combines fresh evidence with the reinterpretation of standard sources to testify to the enduring impact of the Civil War on our national consciousness and refocus our view of the third day at Gettysburg. 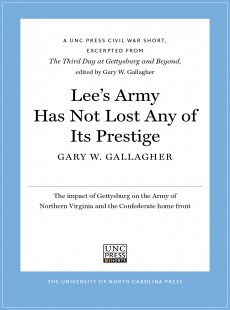 A UNC Press Civil War Short, Excerpted from The Third Day at Gettysburg and Beyond, edited by Gary W. Gallagher