Never did so large a proportion of the American population leave home for an extended period and produce such a detailed record of its experiences in the form of correspondence, diaries, and other papers as during the Civil War. Based on research in more than 1,200 wartime letters and diaries by more than 400 Confederate officers and enlisted men, this book offers a compelling social history of Robert E. Lee's Army of Northern Virginia during its final year, from May 1864 to April 1865.

Organized in a chronological framework, the book uses the words of the soldiers themselves to provide a view of the army's experiences in camp, on the march, in combat, and under siege--from the battles in the Wilderness to the final retreat to Appomattox. It sheds new light on such questions as the state of morale in the army, the causes of desertion, ties between the army and the home front, the debate over arming black men in the Confederacy, and the causes of Confederate defeat. Remarkably
rich and detailed, Lee's Miserables offers a fresh look at one of the most-studied Civil War armies. 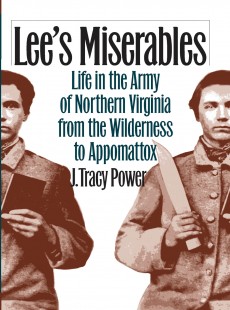