Lefty and Tim is the dual biography of Hall of Fame pitcher Steve "Lefty" Carlton and catcher Tim McCarver, detailing their relationship from 1965, when they played with the St. Louis Cardinals, through 1980, when they played for the Philadelphia Phillies. Along the way McCarver became Carlton's personal catcher, and together they became the best battery in baseball in the mid-to-late 1970s. At first glance Carlton and McCarver appear like an odd couple: McCarver was old school, Carlton new age. At the beginning of his career, McCarver believed that the catcher called the pitches, encouraged the pitcher when necessary, and schooled the pitcher when he deviated from the game plan. But Lefty, who pioneered the use of meditation and martial arts in baseball, was stubborn too. He wanted to control pitch selection. Over time, Carlton and McCarver developed a strong bond off the diamond that allowed them to understand and trust each other. In the process, Steve Carlton became one of the greatest left-handers in the history of Major League Baseball, an achievement that would not have been possible without Tim McCarver as his catcher. Not only did McCarver mentor Carlton as a young hurler with the Cardinals, but he helped resurrect Carlton's career when they were reunited in Philadelphia midseason in 1975. Carlton won his second Cy Young Award with McCarver behind the plate in 1977. Told in the historical context of the time they played the game, Lefty and Tim recounts the pair's time in the tumultuous sixties, with the racial integration of the St. Louis Cardinals and the dominance of pitching, and in the turbulent seventies, characterized by MLB's labor tensions, the arrival of free agency, and the return of the lively ball that followed the lowering of the pitcher's mound in 1969. 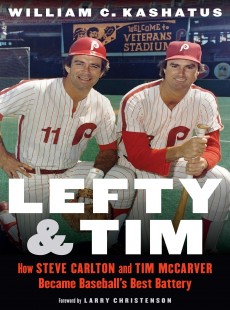