When the Supreme Court declared in 1954 that segregated public
schools were unconstitutional, the highest echelons of
Protestant, Catholic, and Jewish religious organizations
enthusiastically supported the ruling, and black civil rights
workers expected and actively sought the cooperation of their
white religious cohorts. Many white southern clergy, however,
were outspoken in their defense of segregation, and even those
who supported integration were wary of risking their positions by
urging parishioners to act on their avowed religious beliefs in a
common humanity. Those who did so found themselves abandoned by friends, attacked by white supremacists, and often driven from
their communities.


Michael Friedland here offers a collective biography of several
southern and nationally known white religious leaders who did
step forward to join the major social protest movements of the
mid-twentieth century, lending their support first to the civil
rights movement and later to protests over American involvement
in Vietnam. Profiling such activists as William Sloane Coffin
Jr., Daniel and Philip Berrigan, Abraham Joshua Heschel, Eugene
Carson Blake, Robert McAfee Brown, and Will D. Campbell, he
reveals the passions and commitment behind their involvement in these protests and places their actions in the context of a burgeoning ecumenical movement. 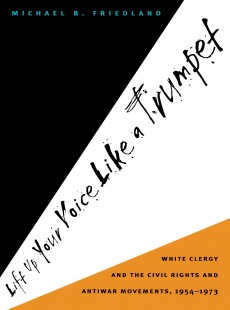 White Clergy and the Civil Rights and Antiwar Movements, 1954-1973