From battlefields, boxcars, and forgotten warehouses to notorious prison camps like Andersonville and Elmira, prisoners seemed to be everywhere during the American Civil War. Yet there is much we do not know about the soldiers and civilians whose very lives were in the hands of their enemies. Living by Inches is the first book to examine how imprisoned men in the Civil War perceived captivity through the basic building blocks of human experience--their five senses. From the first whiffs of a prison warehouse to the taste of cornbread and the feeling of lice, captivity assaulted prisoners' perceptions of their environments and themselves. Evan A. Kutzler demonstrates that the sensory experience of imprisonment produced an inner struggle for men who sought to preserve their bodies, their minds, and their sense of self as distinct from the fundamentally uncivilized and filthy environments surrounding them. From the mundane to the horrific, these men survived the daily experiences of captivity by adjusting to their circumstances, even if these transformations worried prisoners about what type of men they were becoming. 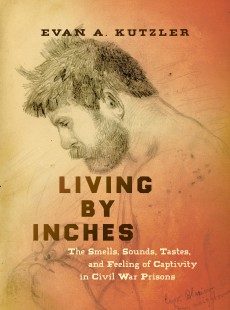 The Smells, Sounds, Tastes, and Feeling of Captivity in Civil War Prisons