Longing for the Bomb traces the unusual story of the first atomic city and the emergence of American nuclear culture. Tucked into the folds of Appalachia and kept off all commercial maps, Oak Ridge, Tennessee, was created for the Manhattan Project by the U.S. government in the 1940s. Its workers labored at a breakneck pace, most aware only that their jobs were helping "the war effort." The city has experienced the entire lifespan of the Atomic Age, from the fevered wartime enrichment of the uranium that fueled Little Boy, through a brief period of atomic utopianism after World War II when it began to brand itself as "The Atomic City," to the anxieties of the Cold War, to the contradictory contemporary period of nuclear unease and atomic nostalgia. Oak Ridge's story deepens our understanding of the complex relationship between America and its bombs.

Blending historiography and ethnography, Lindsey Freeman shows how a once-secret city is visibly caught in an uncertain present, no longer what it was historically yet still clinging to the hope of a nuclear future. It is a place where history, memory, and myth compete and conspire to tell the story of America's atomic past and to explain the nuclear present. 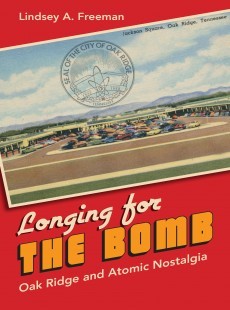 Longing for the Bomb