On July 9, 1883, twenty men stormed the jail in Morehouse Parish, Louisiana, kidnapped Henderson Lee, a black man charged with larceny, and hanged him. Events like this occurred thousands of times across the American South in the late nineteenth and early twentieth centuries, yet we know scarcely more about any of these other victims than we do about Henderson Lee. Drawing on new sources to provide the most comprehensive portrait of the men and women lynched in the American South, Amy Bailey and Stewart Tolnay's revealing profiles and careful analysis begin to restore the identities of--and lend dignity to--hundreds of lynching victims about whom we have known little more than their names and alleged offenses.

Comparing victims' characteristics to those of African American men who were not lynched, Bailey and Tolnay identify the factors that made them more vulnerable to being targeted by mobs, including how old they were; what work they did; their marital status, place of birth, and literacy; and whether they lived in the margins of their communities or possessed higher social status. Assessing these factors in the context of current scholarship on mob violence and reports on the little-studied women and white men who were murdered in similar circumstances, this monumental work brings unprecedented clarity to our understanding of lynching and its victims. 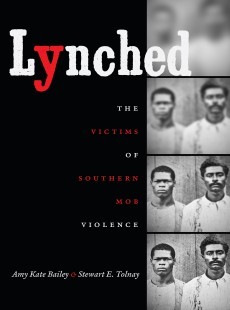 The Victims of Southern Mob Violence