Colorful, shaggy, and unkempt, misfits and outlaws, the 1993 Phillies played hard and partied hard. Led by Darren Daulton, John Kruk, Lenny Dykstra, and Mitch Williams, it was a team the fans loved and continue to love today. Focusing on six key members of the team, Macho Row follows the remarkable season with an up-close look at the players' lives, the team's triumphs and failures, and what made this group so unique and so successful.              With a throwback mentality, the team adhered to baseball's Code. Designed to preserve the moral fabric of the game, the Code's unwritten rules formed the bedrock of this diehard team whose players paid homage and respect to the game at all times. Trusting one another and avoiding ideas of superstardom, they consistently rubbed the opposition the wrong way and didn't care. William C. Kashatus pulls back the covers on this old-school band of brothers, depicting the highs and lows and their brash style while also digging into the suspected steroid use of players on the team. Macho Row is a story of winning and losing, success and failure, and the emotional highs and lows that accompany them. 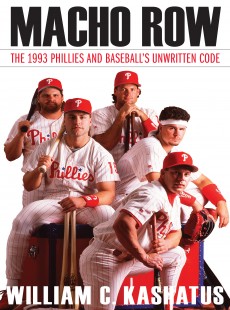 The 1993 Phillies and Baseball's Unwritten Code