The broad sweep of environmental and ecological history has until now been written and understood in predominantly male terms. In Made From This Earth, Vera Norwood explores the relationship of women to the natural environment through the work of writers, illustrators, landscape and garden designers, ornithologists, botanists, biologists, and conservationists.

Norwood begins by showing that the study and promotion of botany was an activity deemed appropriate for women in the early 1800s. After highlighting the work of nineteenth-century scientific illustrators and garden designers, she focuses on nature's advocates such as Rachel Carson and Dian Fossey who differed strongly with men on both women's "nature" and the value of the natural world. These women challenged the dominant, male-controlled ideologies, often framing their critique with reference to values arising from the female experience. Norwood concludes with an analysis of the utopian solutions posed by ecofeminists, the most recent group of women to contest men over the meaning and value of nature. 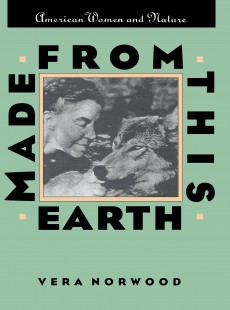 Made From This Earth