A publishing sensation long at the top of the best-seller lists in Israel, the original Hebrew edition of Maimonides and the Book That Changed Judaism has been called the most successful book ever published in Israel on the preeminent medieval Jewish thinker Moses Maimonides. The works of Maimonides, particularly The Guide for the Perplexed, are reckoned among the fundamental texts that influenced all subsequent Jewish philosophy and also proved to be highly influential in Christian and Islamic thought. Spanning subjects ranging from God, prophecy, miracles, revelation, and evil, to politics, messianism, reason in religion, and the therapeutic role of doubt, Maimonides and the Book That Changed Judaism elucidates the complex ideas of The Guide in remarkably clear and engaging prose. Drawing on his own experience as a central figure in the current Israeli renaissance of Jewish culture and spirituality, Micah Goodman brings Maimonides's masterwork into dialogue with the intellectual and spiritual worlds of twenty-first-century readers. Goodman contends that in Maimonides's view, the Torah's purpose is not to bring clarity about God but rather to make us realize that we do not understand God at all; not to resolve inscrutable religious issues but to give us insight into the true nature and purpose of our lives. 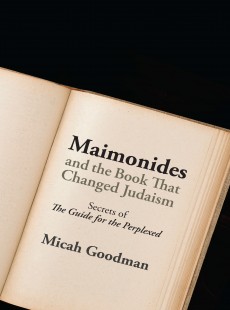 Maimonides and the Book That Changed Judaism

Secrets of "The Guide for the Perplexed"